On Sunday 3 August 2014 Alice Cooper and Motley Crue played the Sprint Center in Kansas City, Missouri. And the show rocked for certain.

The concert was really good. They made us wait about an hour and half to get in to set up the stage; it was an elaborate deal. We waited in line outside Sprint Center in the heat for about an hour plus. Than another hour once they let lots of people in. And that was a long time. Most of it without any liquid refreshment. Which is wrong! 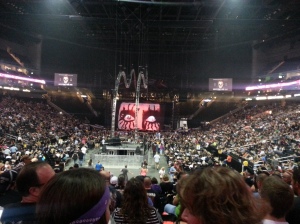 But it was worth it. Alice Copper’s set was quick. Did his hits like School’s Out, Be My Frankenstein, Poison, and No More Mr. Nice Guy and a few other less known songs. But it is crazy that he is still playing rock music. Some of the guys in his band probably weren’t born when he started signing.

And Motley Crue was great. This is there last tour so I am just glad I got to see them. It was a long set that went until after midnight but it was totally worth it. Plus I got the tickets for free so the price was right.

Crue’s assault started with Saints of Los Angeles. They played all the big hits. Smokin in the Boys Room, Dr. Feelgood [personal favorite], Girls-Girls-Girls, Wild Side, Shout At The Devil, Too Fast For Love, Same Ol’ Situation, Without You, Helter Skelter, MotherFu@<er, Kickstart My Heart and other I am sure I am leaving out.

Crue-cificer is amazing. It was mainly for Tommy Lee's drum solo. Not only did it take Tommy Lee's drum set up and out above the crowd. It also spins. Putting together all the aspects of his more daring solos during the other tours. He played a medley of rhythmic tunes that are "banging". It was a mix of hip-hop, rock and other tunes. No Polka though.

Crue acted like they were done with an upbeat song, I wish I could remember which. They took off their instruments. Stepped from behind the drum kit. And said good night.

The house lights never came up though. And luckily my companion implores me to stay. Because she knew something else was coming.

Luckily she did because they came to an alternate stage on the very far side of the Crue-cificer. They played “Home Sweet Home” which is the song I have both enjoyed and liked the longest from them. Not the first I heard. But the first that I remembered and made a real impact. And this stripped down version as the pseudo-encore makes an impact too. The whole band goes up a couple feet and they play their big hit. It was a great ending to a great show.

My pictures suck, I know. I did not take a regular camera. These are from my phone and the camera is not good. Quite frankly I didn’t go for to take pictures. I went to rock. And I got fully and completely rocked by the end of the night.

Glad I got to see them.

Just an Average Joe
View all posts by drphlgoode →
This entry was posted in Music and tagged Alice Cooper, Be My Frankenstein, Crue-cificer, Dr. Feelgood, Girls-Girls-Girls, Home Sweet Home, Kickstart My Heart, Motley Crue, No More Mr. Nice Guy, Poison, Same Ol' Situation, School's Out, Shout At The Devil, Smokin in the Boys Room, Wild Side, Without You. Bookmark the permalink.